Jazz sweetheart Anita Eccleston is a multifaceted vocalist, instrumentalist, composer and arranger. Born in Kamloops, she was raised in a musical family who encouraged her music when she fell in love with the trumpet and vocal jazz. She pursued it in Montreal, studying at McGill University, and eventually landed in Vancouver, releasing her debut solo album, Jazz EP (2011).

Upon releasing So It Goes (2014), her first album of original songs, she toured eastern Canada, showcasing at Canadian Music Week in Toronto. She has also led her band at the Vancouver International Jazz Festival several times, melding her eclectic songs with her jazz in spectacular style.

Eccleston’s records have been played on radio stations across Canada. Her most recent jazz album, More Trumpet (2016) hit #5 on the !earshot National Jazz Charts. She has also performed for CBC Radio One’s jazz program, Hot Air, and her music has been featured by Italian radio show Donne in Jazz.

Her holiday single Long Nights (2021) received a warm reception, garnering over 11k streams on Spotify in its first seasonal cycle and 9k more in it's second season.

Anita has released a new album, Gala Gardens (2022) November 4th. It is an instrumental lofi jazz album which she played on, produced, recorded, and mixed herself. The first single “Golden Hour,” is a laid-back swinging song that sounds like being bathed in sunshine. The album has been receiving radio airplay across Canada and has been charting on !earshot for various stations peaking at #4 on several Top 30 charts so far, as well as #1 on the CFUV (Victoria) Jazz Charts. 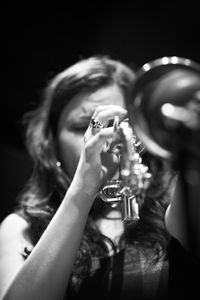 The Anita Eccleston Jazz project is a an ever evolving ensemble, thriving in any configuration, be it a Duo, Trio, Quartet or Quintet or 12 -18 piece band. In addition to traditional jazz songbooks, they delve into the vibrant waters of contemporary influences, mixing and shaking up old customs with new innovations with choice covers and originals.

Girl A Girl B - Trio: Twins plus cello

Formed during the Summer of 2014, Mariachi Las Estrellas is Vancouver's only all-female Mariachi Band. It is made up of a diverse and talented group of women from a variety of backgrounds including classical, jazz and world music. Like their Facebook page to keep up with the ladies. https://www.facebook.com/Las-Estrellas-de-Vancouver-1634965453407354
Available for parties, private events, festivals and any other occasion. Bookings: estrellasdevancouver@gmail.com